The world’s first non-chemical robotic weeding for cereal crops, made by agri-tech start up Small Robot Company, has successfully identified and killed weeds at a field trial in Hampshire. The wheeled robot uses igus® delta robot arms to position a “zapper” and deploy ‘lightning strikes’ to kill weeds. Delta robot arms from igus were selected for precision, low-cost and self-lubricating engineering. The weed killing robot, called “Dick”, works in concert with a monitoring robot, “Tom”, to identify weed patches then kill individual plants with a zapper device.

Other novel farming and industrial applications of the robot using the delta arms are being explored. 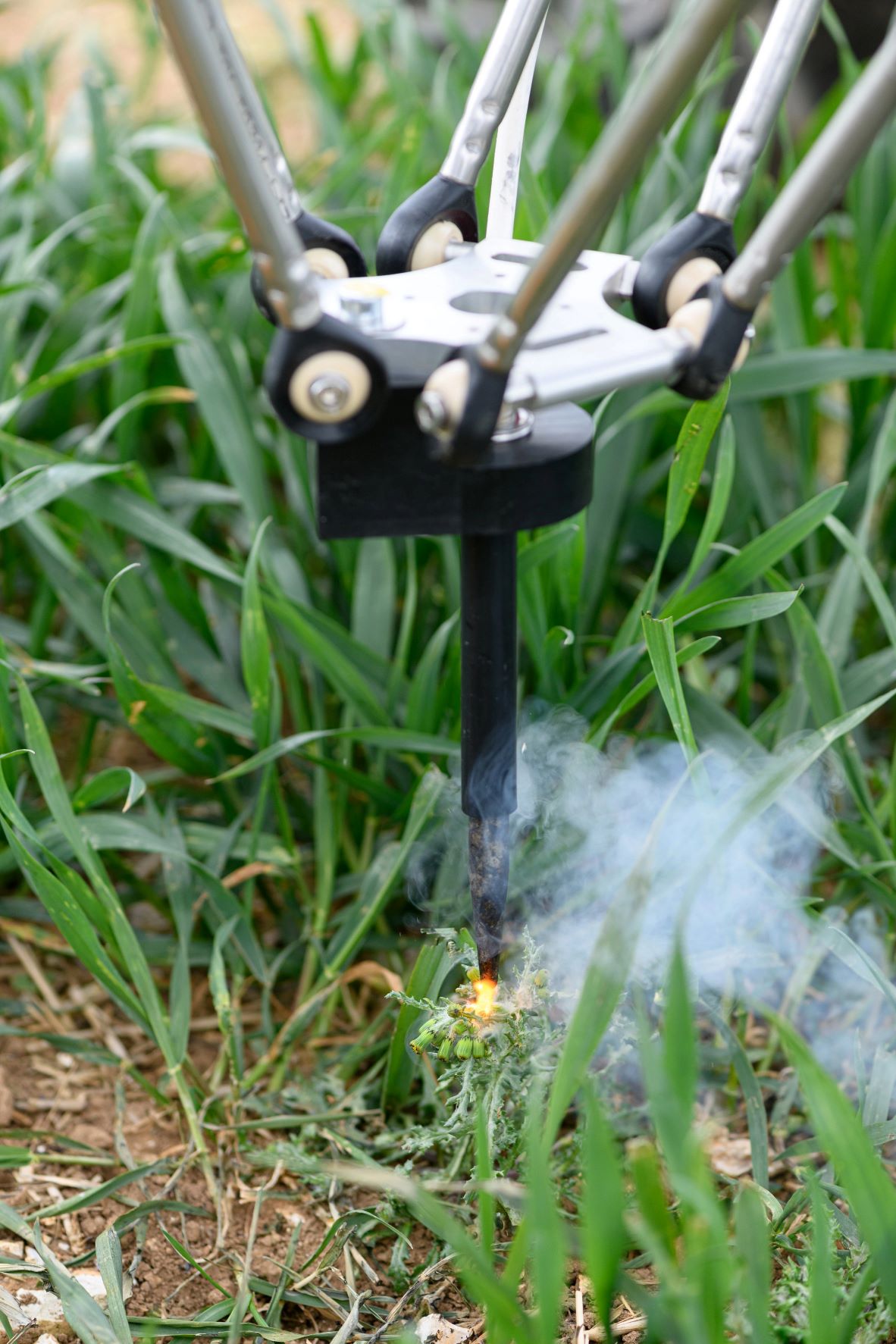 Small Robot Company with key partners igus and RootWave have demonstrated the world’s-first self-driving robot that can identify and kill weeds with a specialized “zapper” device using electricity.

It is the world’s first non-chemical weed killing robot that can destroy weeds at an individual plant level, making it an exciting, low impact technology for farming where the currently necessary blanket spraying of herbicides involves costly wastage, with detrimental impact on the environment.  In addition, soil degradation from herbicides and soil compaction reduces crop yields.

igus was selected as the preferred delta robot manufacturer due to the light weight, precision and low cost. Many competing delta robots cost up to £20,000 while the igus delta is about £5,000, developed at this price as part of igus’ Low-Cost Automation division for R&D applications, but possessing robust engineering suitable for commercial scale-up.

Also at the event, the “Tom” monitoring robot uses proprietary Wilma artificial intelligence (AI) to scan the field for weed patches which it uses to define a path for “Dick” to follow. Dick is then dispatched to “seek and destroy”, and the Dick robot can now both identify specific weeds in a patch and kill them.

This two-robot approach demonstrates SRC’s “end-to-end service” model, using multiple robots with AI working together to scan the field on a plant level then take action. Furthermore, SRC and igus are looking to work on different actions, where Tom and Dick could combine again for spot spraying, spot fertilizing or slug killing, for example.

The igus delta robot’s components and control system is key to the weed killing operation, where ease of use and cost are paramount. Firstly, the delta units are made from standard drylin® parts, making assembly easy and low cost. They have been thoroughly field tested to ensure they cope with wet mud and water splash. 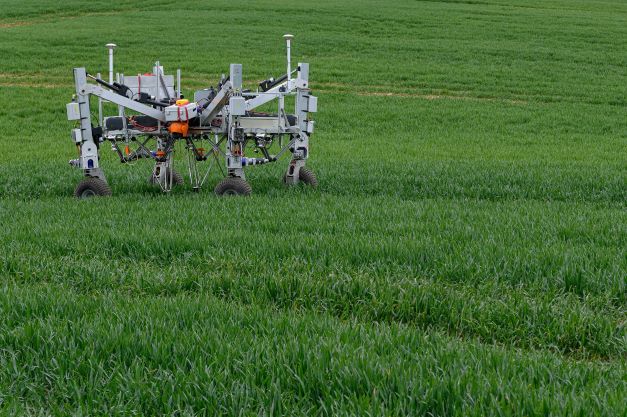 Stepper motors are linked to controllers that help position the delta robot directly over the weeds. The motors have encoders, which help the delta know what position it is in, with good industrial protocols so they are easy to program. The SRC’s robot’s, i.e. Dick’s, master controller and AI “speak” to the igus motor controller to synchronize the robot’s position with the delta arm, forming a closed loop monitoring system.

igus Low-Cost automation engineer Angelos Bitivelias has worked with universities and industrial companies on delta robots for applications like fruit picking, so he brings the knowledge of how the igus delta can be best modified for the weed killing application.

“The Dick robot moves to one side, a camera takes a photo of the weed, the AI identifies it as a weed, and then AI decides where to zap it,” says Angelos. “The kinematics of the delta makes it well suited to the end effector and the belt drive means the zapper is always parallel to the ground below.”

An essential feature of the delta and igus components is they are self-lubricating. Lubricated moving parts like the belt drive and bearings would potentially clog up with soil and water in a muddy field, but igus polymers and parts are designed to be dry running. 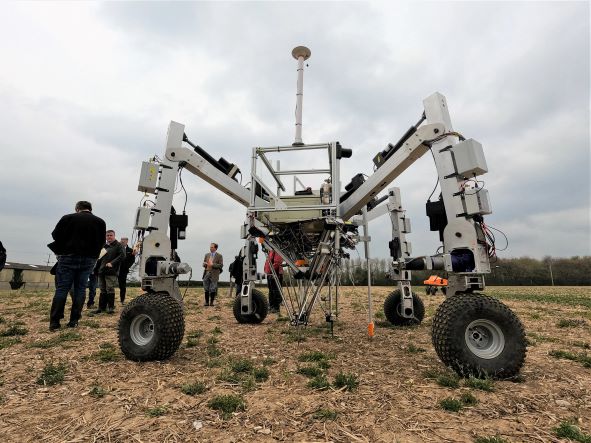 Precision is also a strong feature. “The milestone we’ve hit is that we can now take action at the plant level,” says Andy Hall, head of prototyping, Small Robot Company. “Using artificial intelligence, the robots can recognize the weeds in the [camera] shot and target the robotic arm onto those weeds. At that point we can do anything we want. Our robotic platform incorporating the igus arm could have many different technologies bolted on – and the world’s our oyster on that.”

The affordability, precision, durability and reliability of the igus delta robots are perfect for this and new agricultural applications, says Managing Director of igus UK, Matthew Aldridge. “Because the delta is lightweight and low-cost it has opened up new opportunities for these robots to be used in mobile applications, proving a new technology in a harsh outdoor environment. igus is planning to work with SRC on new industrial applications where precise and low impact actions are needed on farms and potentially other scenarios.”

“To prove the power of per plant farming, we are focused on answering the biggest problem that farmers face at the moment, which is weeding,” comments Ben Scott-Robinson, CEO and co-founder, Small Robot Company. “We’ve now proved we can deliver per plant weeding: a world first. The focus for us now is being able to move forward to deliver this repeatedly, and at scale. This will be game-changing.”

Following the successful field trials on April 28th, the next stage for Tom and Dick are efficacy trials, measuring the force required to destroy the weeds, including the comparison of different varieties, to ensure that they are totally destroyed and not partially killed.