Roboeatz is revolutionizing the food service industry by relying entirely on igus motion plastics, which require no lubrication or maintenance.  The Canadian start-up Roboeatz has developed a kitchen where a robot is the only cook! The robot chef quickly and efficiently makes a wide range of dishes from fresh ingredients. In developing this unique robot cell and scaling up to series production, the developers extensively use the large modular construction kit from igus®.

Can robots prepare meals? Doubts on this topic are understandable. After all, producing a simple pasta dish can involve multiple individual steps, such as cutting, cooking, weighing, mixing, frying, and heating. But this did not deter the founders of start-up company Roboeatz.

In 2019, Roboeatz started developing the Autonomous Robotic Kitchen, or ARK. It can prepare not just one but multiple hot and cold meals in a short amount of time without compromising the quality. Konstantins Korchomkins and Janis Poruks had experience in the field as they had managed a restaurant chain together for ten years in Latvia. Poruks has a technical background, and Korchomkins also ran a company providing engineering services to the aerospace industry. They also had a clear goal.  Poruks says, "It is difficult to find employees who want to work in catering. And the quality of the food prepared is often inconsistent. This is not acceptable in the catering industry. We also wanted to make sure that fresh produce was used as a matter of principle." 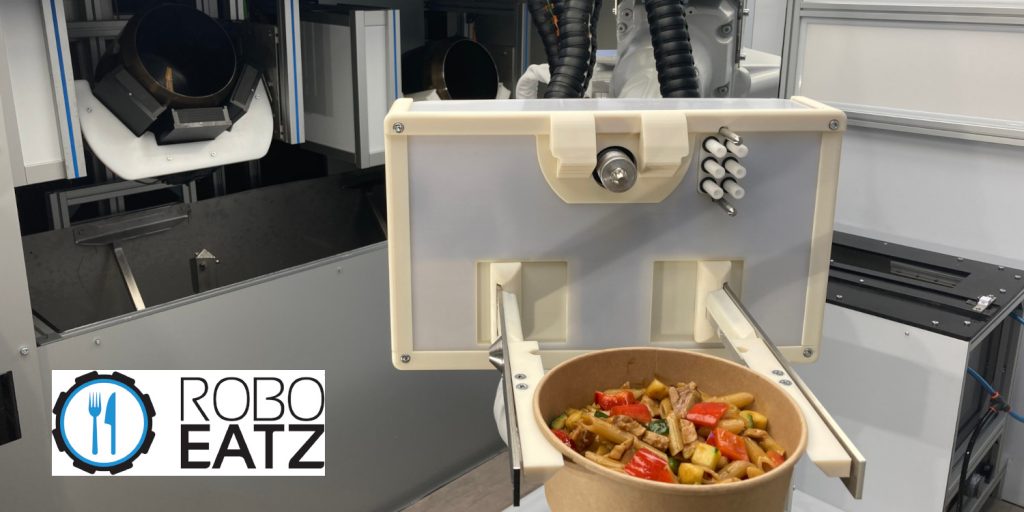 The robot is the cook here

How does the robot kitchen work? An industrial robot stands in the middle of the kitchen cell. Mounted on two of the inner walls are 50 containers for solid ingredients and 30 for liquid ingredients. The third wall bears utensils, such as cooking pots and mixers. When the robot cooks, it grips one of the containers and tips a weighed amount of ingredients into the working device. It can repeat this step as often as needed, preparing each ingredient fresh and individually - without physically touching any of them, as the gripper handles only the containers. Finally, the prepared ingredients are combined, cooked, and, if necessary, garnished.

This idea has now been tested using prototypes. Its innovation is captivating the pulse of the times and the current needs of the market. The founders are targeting system catering, canteens in companies and hospitals, and innovative catering operations in public places, such as airports, over small independent restaurants. And even though the robotic cell uses artificial intelligence, the developers rely on human expertise for recipes.

Korchomkins says, "When it comes to recipes, the restaurateur has a free reign. We provide the user interface where he drags and drops recipe elements and preparation data such as cooking time and temperature."

The sky is the limit with dishes ranging from salads, soups, and pasta to vegetarian and meat dishes. Every hour the cell can prepare up to 70 meals while automatically cleaning itself and refilling the contents of ingredient containers. 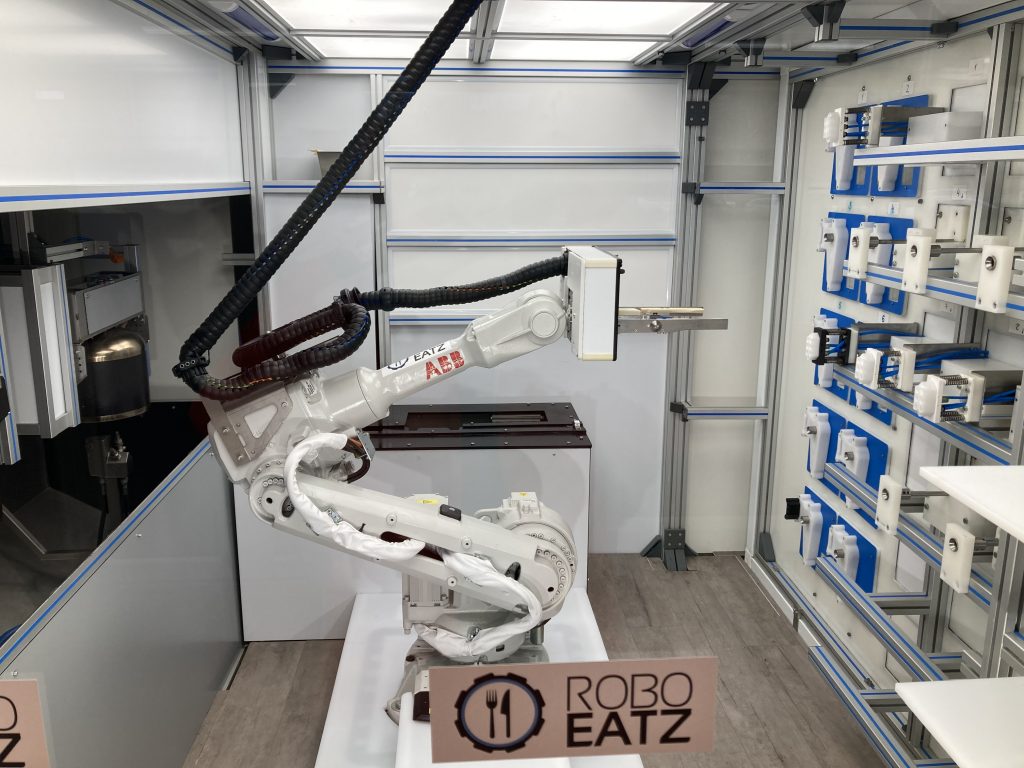 From prototype to series - with the igus modular construction kit

For the prototype, Janis Poruks had many of the components he designed produced as individual parts in 3D printing materials. However, in preparation for series production, he also selected a component from the igus modular construction kit. The developers were able to draw on the years of robotics and automation expertise igus possesses. igus operates its own Low-Cost Automation department. This department concentrates on and implements projects such as these and provides customers with ready-made systems or individual robotics components as required.

The customer can purchase a complete system or individual components directly from a single source. For example, an RBR e-chain® supply system with a rotation angle of 360° in the robot's first axis delivers energy and signals to the robot. igubal® fixed flange bearings and rod ends, which require no lubrication or maintenance, are responsible for the pivoting movement of the wok and the ingredient boxes, making them self-aligning. iglide® MCM clip bearings also serve as shaft guides in metal sheet connections.

The linear movements of the individual axes on the containers, for example, are implemented with drylin® linear technology. drylin SLW linear actuators ensure that the gripper, a highly stressed component, functions safely. A reverse lead screw opens and closes the gripper arm. Finally, a triflex® multi-axis cable carrier that can move in three dimensions and has a retraction system mounted on the robot arm. 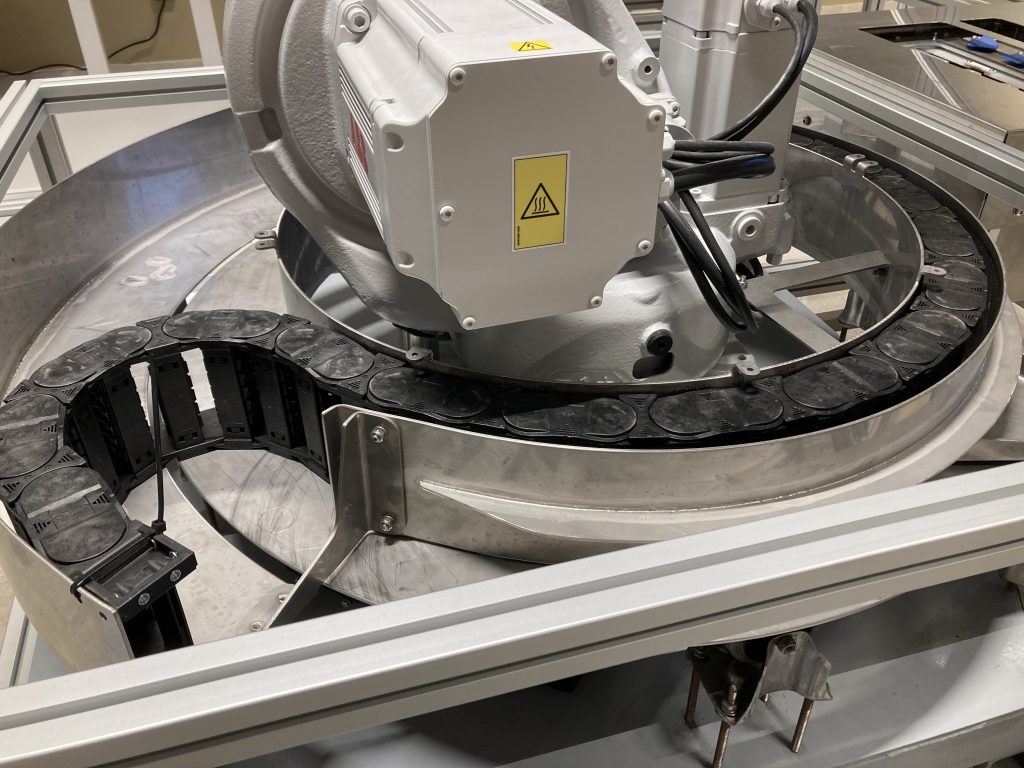 Good reasons to collaborate with igus

There is more than one reason why Janis Poruks relies on igus: "The bearing and drive components are lubricant-free, which is a key point in food processing. They are very durable, and their service life can be calculated online. It is also important to us to be working with a supplier with a global presence. After all, we want our robotic kitchens to be used internationally."  Cost savings is also an issue: "Our market is not industrial but gastronomy, which is price-sensitive."

Another key point is scalability: "If we sell 1,000 or 10,000 robots a year, as we hope to do, we can cover those orders easily with igus production parts." The Roboeatz founders are also pursuing a strategy of keeping the number of suppliers as low as possible. They have found igus and its partner, Techvitas, reliable and highly competent. Dynamics are always important for a start-up company: "Delivery times are short, which is ideal. We even get our sample parts quickly and easily." After constructing several prototypes, two years of testing, continuous improvement, and the first test runs in restaurants, the first "robot kitchen" has already been put into operation. The goal is to start series production in the second quarter of 2022. Ultimately, return on investment will be determined by market success. "It's quite clear that the system must be profitable for the restaurateur. We expect a payback period of two to three years," says Poruks. Interest in the catering industry is already high. "We are convinced that this is the future of gastronomy," Korchomkins says. And as a contributor of many parts, igus is part of it.