iglide® plastics were used to create a lightweight, maintenance-free and labor-saving new device

Products made with engineered plastics continue to emerge, including some that might seem unexpected. Construction, electronics, packaging, office equipment, transportation and home products—everything from microwaves to toothbrushes—contain some measure of plastics. 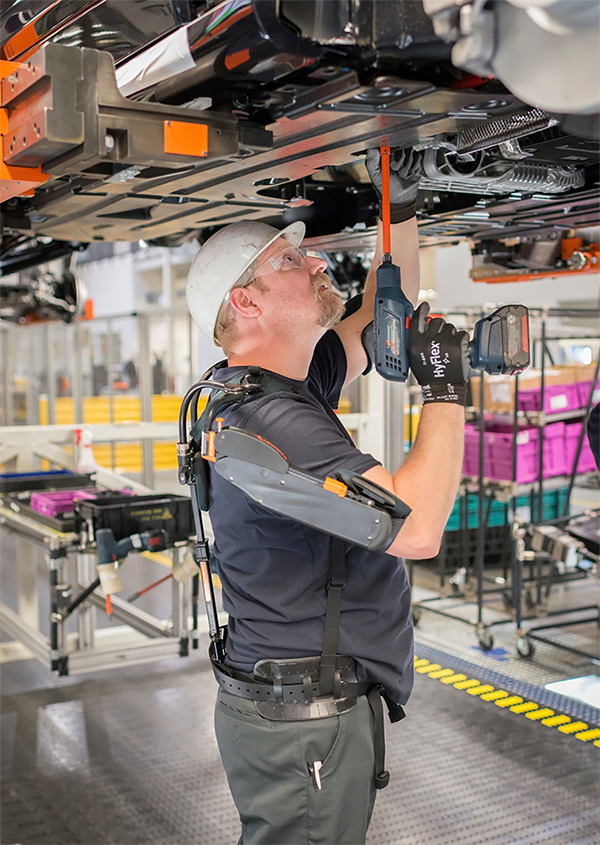 A new device that supports manufacturing workers is among the latest technological advancements that speak to the power of plastics. The device, the Airframe™ exoskeleton, is made by San Diego-based Levitate Technologies and includes engineered plastic components made by igus®. The exoskeleton improves quality and precision, boosts productivity and perhaps most importantly, helps reduce worker fatigue.

The Airframe is designed like a backpack and can be adjusted to almost any body size with an adjustable frame and straps. It supports the upper extremities of professionals and skilled trade workers who are exposed to repetitive arm motions and/or stationary arm elevation.

“The benefits of this device have been incredible,” said Terry Butler, former director of environmental health & safety at the Vermeer Corporation, a manufacturer of industrial and agricultural equipment in Iowa. “The team members that have used this tool are more than happy to use it and have seen more prolonged work activities without feeling fatigued by the end of their shift.”

Designed with doctors in mind 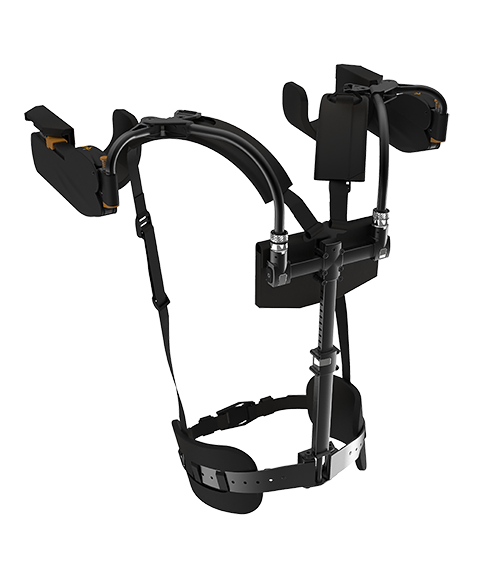 The product was introduced by engineer Mark Doyle in 2013, and he worked with Pathway, a design company, to enhance the exoskeleton’s manufacturability. It is produced by D&K Engineering. Initially, Doyle designed the device for surgeons who suffered from fatigue and pain after long surgeries.

When Doyle designed the Airframe, there were no systems available that allowed a surgeon to move freely while operating. Only stationary delivery systems were in use at the time. Surgeons who used the wearable frame found it had a positive effect, and a study from an Internal Review Board at the hospital where surgeons wore the exoskeleton confirmed its value. The study found fatigue in surgeons who wore the exoskeleton decreased by 50 percent in operations after 12 minutes, and the pain rate decreased by about 25 percent. 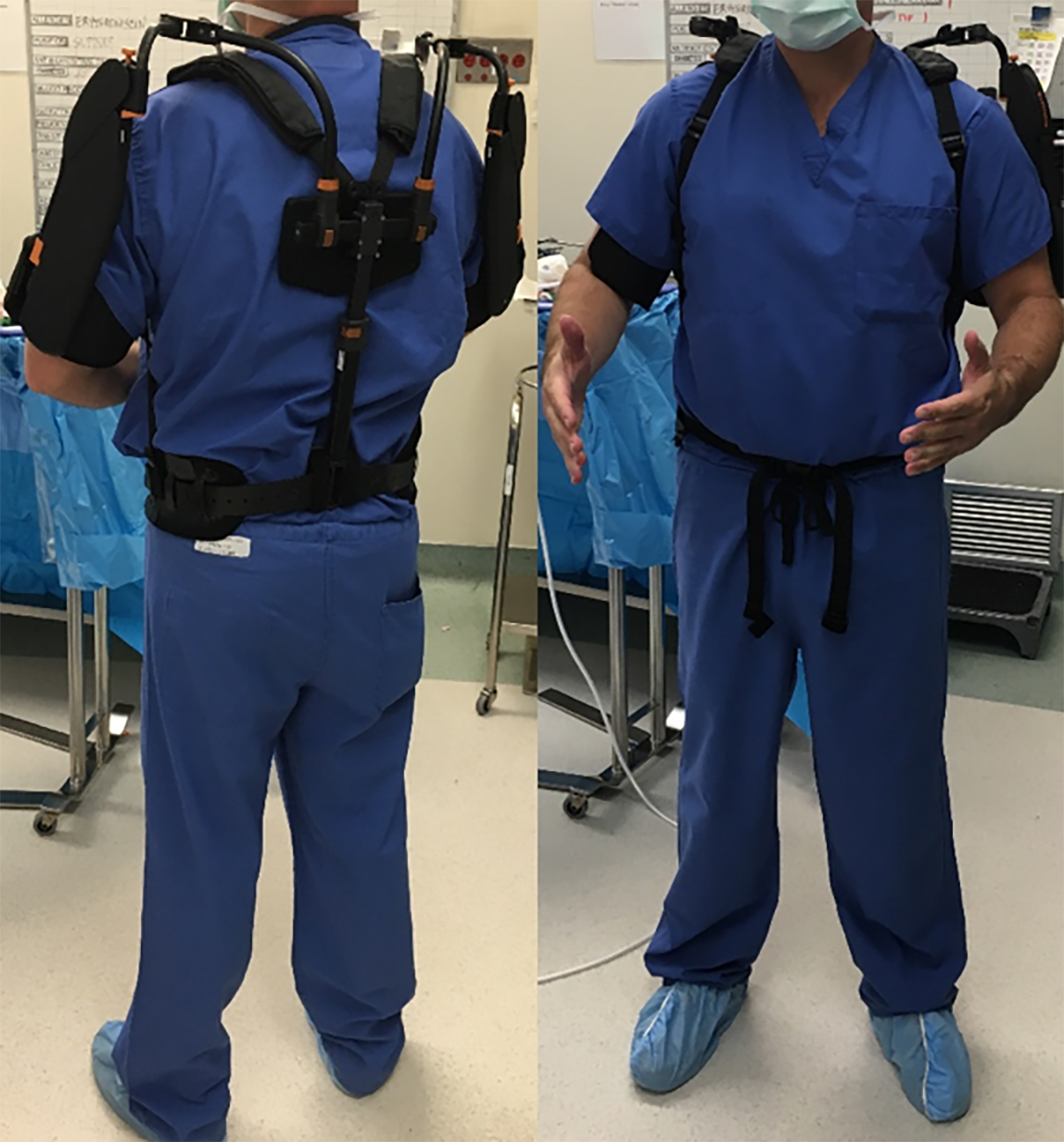 “When we were designing the exoskeleton, we thought it would work for photographers, and in the general consumer market,’’ said Joseph Zawaideh, the vice president of marketing and business development for Levitate. “But we weren’t sure. We thought surgeons would be a good starting point.”

As the Airframe proved successful for surgeons, manufacturing facilities became aware of the product. One major auto manufacturer quickly realized the benefits for its employees, so Levitate switched its marketing focus and ramped up production. “We became laser focused on manufacturing and our business plan switched,’’ Zawaideh said. “We changed our focus.”

Finding a home in manufacturing

The Airframe is now being used in manufacturing plans in aerospace and airplane assembly, heavy machinery, ship building, and the agricultural, paper and chemical industries. Even the U.S. Navy is using the Airframe for maintenance work.

The device has been particularly useful in automobile assembly facilities. The Airframe has been used extensively at a BMW Manufacturing facility in Spartanburg, S.C., where its X-series SUVs are assembled. “They embraced the Airframe quickly and even mentioned that they do not want to go back to not using it,’’ Zawaideh said. “Users said that they appreciated that the Airframe was very low profile, lightweight and did not restrict motion.” 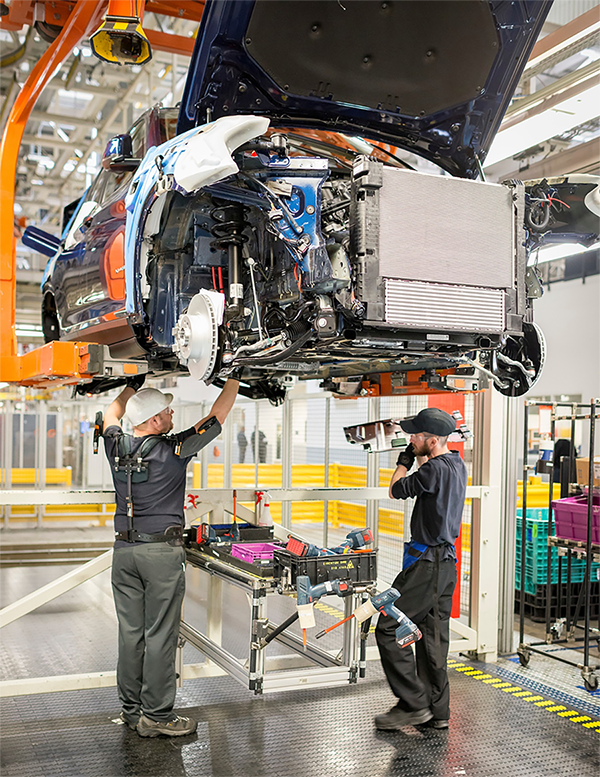 Statistics from other industries also speak to the value of the Airframe. Tests were conducted over a five-day period at a manufacturing facility in which welders and painters wore the Airframe. In both cases, productivity and quality spiked.

In dynamic tasks where painters wore the Airframe, the amount they were able to paint increased by 53 percent before their muscles became fatigued. Quality improved as well, as the exoskeleton helped subjects maintain a steady hand while performing tasks. Welders performing static tasks saw an 86 percent increase in productivity and an increase in quality. Welders were able to complete successful welds over a much longer period while wearing the Airframe, according to statistics provided by Levitate.

“The automotive industry has been one of the early adopters of this technology,’’ Zawaideh said. “It’s also a good fit for aerospace, engine manufacturing, airplane building and in heavy machinery. When we thought about the product, we found it can reach all these different verticals. There are six million non-supervisory production jobs in the United States, so there is a massive opportunity.”

Improving the Health of Workers

Besides increased productivity and efficiency, the Airframe might also help workers stay healthy. A safety and ergonomic risk assessment at one auto manufacturer found that the Airframe reduced physical work stress by 20 percent. 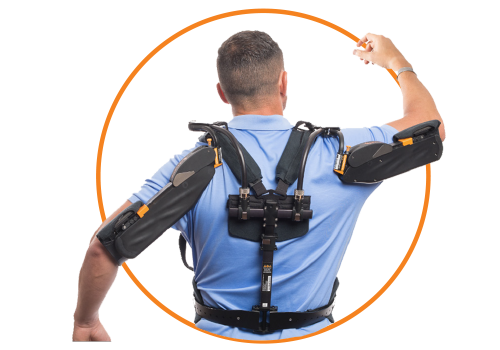 Levitate also reported the findings of a study it conducted, which measured the impact of wearing the Airframe during a series of physical activities that mimicked common industrial tasks. During the study, objective measures of shoulder and neck muscle exertion and force were collected via electromyography (EMG) sensors placed on the muscles. Measures of dexterity were collected during tests, and subjective comfort and effectiveness data was collected.

The results indicated a statistically significant reduction in the muscle exertion required to perform the physical tasks, a slight increase in manual dexterity and an overwhelming preference regarding the comfort of the device. The device lessens muscle fatigue of the shoulder and, by supporting the upper arm and offloading weight to the hips, reduces spinal compression forces on the lower back.

Work-related musculoskeletal disorders (WMSD) are a huge problem for many businesses. More than 650,000 cases of WMSD cases are reported each year. WMSD disorders represent 33 percent of every dollar spent on workers compensation. “From 1961-2011, disability claims from heart disease and stroke decreased from about 30 percent to 8 percent,’’ Zawaideh said. “Disability claims from musculoskeletal disorders jumped from 10 to 33 percent. There’s a critical need for assisting workers. The average age of workers is 47.”

Work-related musculoskeletal disorders are responsible for $50 billion in lost productivity annually in the United States, and account for nearly 70 million physician office visits each year, according to the Centers for Disease Control and Prevention.

The Airframe transfers the weight of the arms from the shoulders, neck and upper back to the core through pads that rest on the outside of the hips, thus relieving muscle and joint strain. By transferring upper extremity load, the device helps sustain high quality performance, protects health and improves overall work conditions.

The unit is flexible and scalable to individuals of any size. It slips on and off easily and moves seamlessly with the wearer without limiting dexterity or intruding upon the workspace. The mechanical support system progressively activates as the arm is raised and gradually releases as the arm is lowered to provide the right level of support at each point in the movement. The Airframe lowers exertion levels up to 80 percent.

“The difference between the Airframe and other exoskeletons now on the market is that it’s very lightweight, and extremely comfortable,’’ Doyle said. “It’s very comfortable and makes motion very natural. We worked hard to make it feel smooth and natural when being worn and activated.”

The right to light

Doyle said the primary challenge in designing the Airframe was keeping the unit light. “The goal was light weight and maintenance-free,’’ Doyle said. “I always favored parts that are self-lubricating. They’re also corrosion-resistant and easy to install, which made them ideal for this application.”

“Asking human beings to wear a metallic frame and do their jobs is not an easy task,’’ Zawaideh said. “We needed something that was light weight, low profile and could adjust to all the different mechanisms and synchronization. It required attention to detail on every screw and every bolt. Our mindset was if you don’t need it, don’t add it”

The Airframe includes 32 plastic bushings manufactured by igus®.  The engineered plastic bearings make the Airframe very lightweight. They are also self-lubricating, dirt and dust-resistant, and cost-effective.

The iglide® G300 bearing, which is one of those used in the Airframe, is among the most popular igus® products. The bushing is used frequently in agricultural machines, automotive, construction, sports and leisure, machine building and mechatronics.

The iglide® G300 has a PV value of 12,000, a tensile strength of 30,460 at 68 degrees and a density of 1.46 g/cm³. Typical applications include those that must withstand medium to high loads, medium sliding speeds and medium temperatures. “It’s a general-purpose bearing and has a good mix of wear, low friction and reasonable cost,’’ Doyle said. “It’s a good all-around performer.” 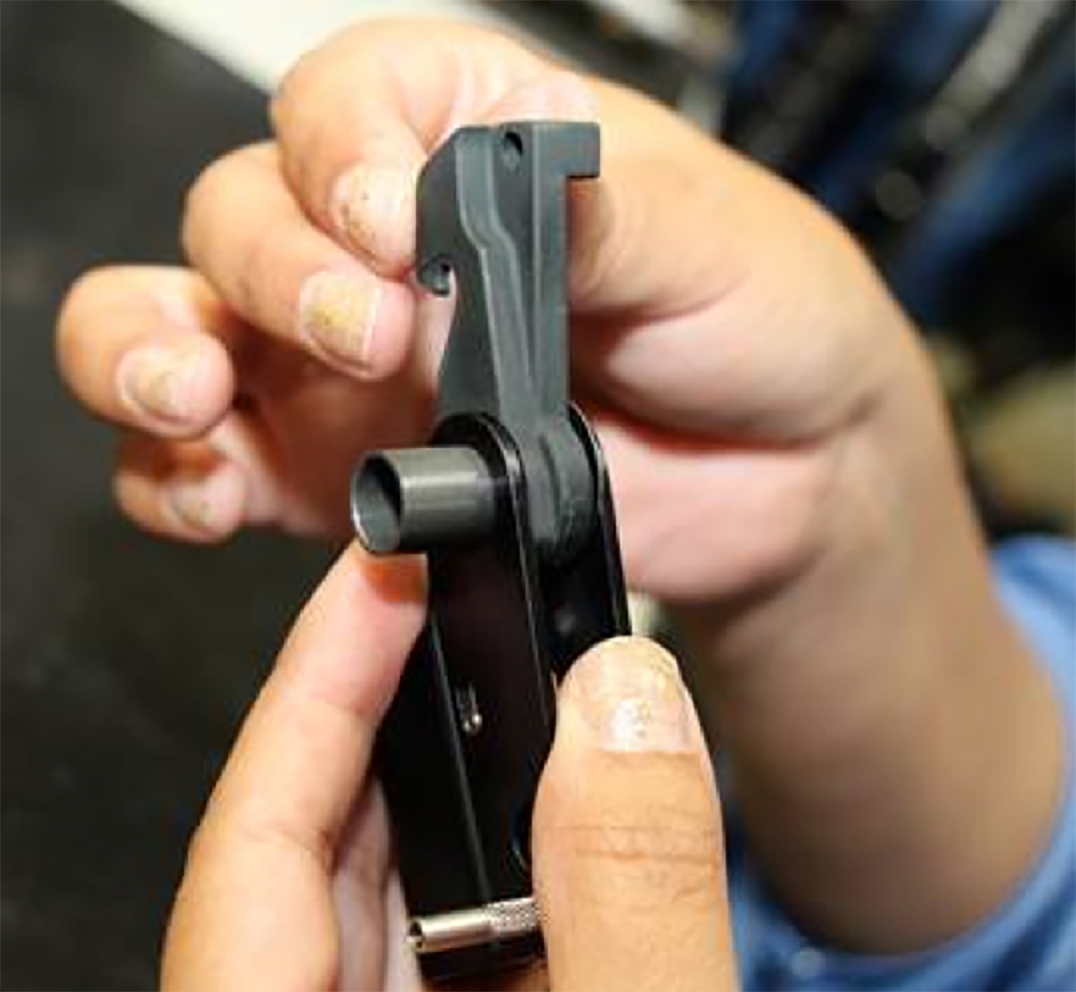 Doyle also needed to adjust some bushings as he developed the exoskeleton. “I have experience with the igus® bushings, so I was not surprised they performed well,’’ he said. “I was surprised our device was able to generate heat. The conditions the bushings were subjected to were different than what we expected, and we found out what was causing failure. But it only appeared in live testing. We have not seen failure in the field.”

Doyle also selected the iglide® M250 bushing for the exoskeleton which has several important qualities, especially relating to manufacturing. The bushing resists dirt and dampens vibration, which reduces noise and results in an extended life for the Airframe. The M250 bushing is the lightest of all igus components in the unit, weighing just 1.14/g/cm³.

All igus® products go through extensive testing to ensure durability. They are manufactured during a three-step engineering process and are made with any combination of up to 30 materials that are blended together, based on the application. Products then go through exhaustive testing.

The use of plastic components in the design of the Airframe is consistent with growing trends in plastic production. In 2016, the global production of plastics reached 335 million metric tons. The global plastics market is expected to reach $6754.38 billion by 2020, according to a 2015 study by Grand View Research, Inc.

One of the key drivers in the increased use in plastics is weight reduction. The automobile industry has embraced the plastics trend for years to reduce vehicle weight. Now, many engineers and designers are seeking ways to use plastics in their projects, primarily to reduce weight and improve durability. Many construction projects are also now using plastic building components to replace wood, steel, and concrete. Companies are also using plastics to create structural components for buildings, bridges and railroads.

Plastics have been particularly critical in automobile manufacturing. In 2014, plastic composites of $430 per vehicle were used in light vehicles in North America. While lighter vehicles improve fuel efficiency, U.S. gasoline consumption continues to grow. In August of 2017, demand for gasoline hit a record high, according to the U.S. Energy Information Administration.

“There are a lot of exoskeletons on the market,’’ Zawaideh said. “This is the lightest one out there. It’s light enough that workers can wear it all day.”

Image sources: BMW USA, Center for the Future of Surgery