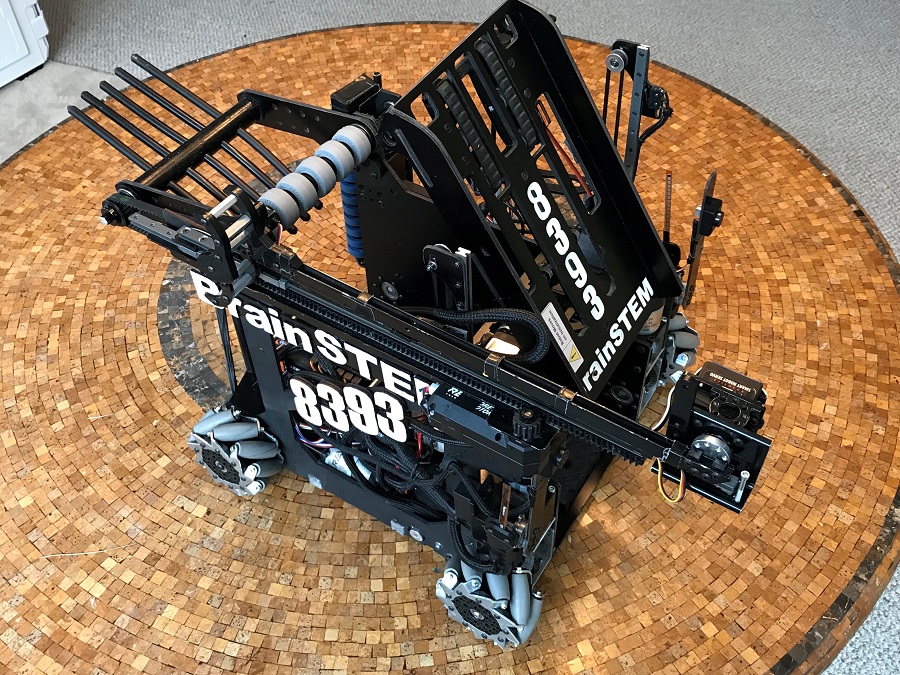 Students from a Pennsylvania high school robotics team set out on a quest to design, build and compete against the best teenagers from across the world. There was no promise of success, no guarantee that they could even create a model that would work, let alone distinguish itself as one of the best in competition against robots designed by other young, innovative minds.

Fortunately for the students from the Pittsburgh-based squad, called The Giant Diencephalic BrainSTEM team, their work produced results that stretched beyond their wildest dreams. The 10-member team, which included students in grades 9-12, set four world records in the 2018 FIRST Tech Challenge before the event’s grand finale competition in late April that same year.

In the final competition, competing against the sharpest young minds from around the globe, the Keystone State kids engineered one final amazing accomplishment. They competed in an alliance with two other teams from Lexington, MA before a raucous audience of more than 40,000 and won the FIRST Tech Challenge world championship.

“Winning the event as an alliance was extremely satisfying,’’ James Walton, senior captain of the Pennsylvania team, said. “Our alliance partners were real pros and we all worked seamlessly to pull off the upset.  In these events, alliance selection is critical. Our experiences throughout the season, winning some big tournaments, setting a bunch of world records and holding the game's top score for almost two-thirds of the season helped our alliance captain see those characteristics in us, and it was a pleasure playing with two teams that are so technically advanced and that have such ‘clutch’ drivers.”

Dean Kamen, an American engineer who is best known as the inventor of the Segway, founded the FIRST competition in 1989.

In the inaugural robotics competition in 1992, 28 teams competed in a high school gymnasium in New Hampshire. More divisions and competitions have been added over time, and now students as young as six compete in an event using LEGOs.

The FIRST Tech Challenge included more than 60,000 students on just over 6,000 teams. The students develop STEM skills and practice engineering principles and events. The competitions are akin to high school sports events.

“The robots are just a vehicle,’’ Kamen said in an interview with CNN in 2011. “We take everything from the playbook of sports, and we transfer it. Except the game they’re playing has content that matters to life. The superstars they’re meeting are the kinds of people we want our kids to aspire to be like.”

In FIRST Tech Challenge, teams are challenged to design, build, program and operate robots to compete in a head-to-head challenge. In this year’s event, “Relic Recovery,” robots collected and scored “glyphs” (foam cubes) in various patterns, retrieved “jewels,” transferred “relics”, parked on balancing “stones” and navigated a playing field – all autonomously. Teams started to design their robots after FIRST released a video in September that identified the challenges.

The robot designed by the Pennsylvania teenagers includes spinning collectors, elevating depositing-platforms and robotic arms built on a fast moving, omni-directional drivetrain. Students worked for as much as 40 hours a week in the early stages to design their robot, and they developed a working model after about two months.

The first step in their robot design entailed developing the drivetrain after visiting a competition site to see the “field” on which it would be competing. The students then discussed ideas on how to best navigate the field.

“We used a CAD model to determine what we could do for the drivetrain,’’ Walton said. “We wanted something that was custom designed.”

They built a light, quick, omni-directional mecanum unit to take into competition.

On the next design stage, the teenagers built a floor for the drivetrain, and added two vertical walls and a u-shaped panel in the middle of the robot for depositing the cubes and jewels. The team then built lifts for the cubes, the collector, storage system and tilts.

Team members worked independently on each segment of the robot and shared their information through a master file. After designing the robot, the team fabricated the parts, laser cut and milled components, wired the robot and lined up the cables.

Walton said the team tweaked each part to make the intake method as fast as possible and custom designed the entire robot.

“It’s more challenging with custom designs, but it was worth it,’’ Walton said. “When you custom make everything, it allows you more flexibility in the design.”

The team also took advantage of its experience with computer-assisted design. In the 2016-17 competition, the students created their robot with computer assistance and incorporated lessons from that work to build the new robot.

“It was still a ton of work, but it took a little less time because we were more experienced with computer assisted design,’’ he said. “It’s probably one of the things that helped us a lot.”

The primary mechanical challenge came in designing a collection system, and they solved it with low-profile, self-lubricating linear glides. The unit includes five miniature glides, which are manufactured by igus®, a company headquartered in Germany that runs its North American operations in East Providence, RI. 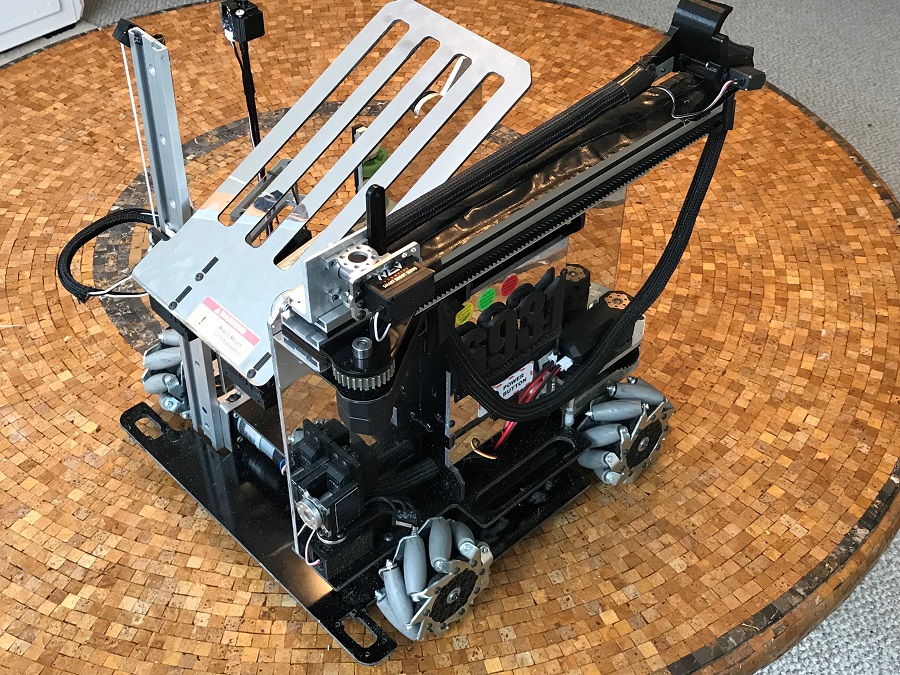 The drylin® guides are small, compact and adjustable. The guide systems are manufactured with igus®’ engineered plastics, and are frequently found in woodworking tools, machine tools, package handling, lab automation and machine building. The guides are corrosion and wear resistant and operate quietly.

The miniature glides were key to the robot because of their lightweight and self-lubricating properties.

The 9-millimeter rail guide used in the robot weighs just .11 kg/m and the carriage weighs just 17 grams. They also did not have to lubricate the robot after each competition or practice.

“The lightness of the robot was certainly due in part to being able to swap out traditional heavy drawer slides with the lightweight igus® rails and sliders,” Walton said. “We were definitely the fastest robot on the field and that gave us some real advantages over the course of the finals and in the championship match.”

In its run to the championship, the Pittsburgh teenagers distinguished themselves every step of the way.  The team set its first world record in Ohio in December and subsequently added three more on its way to Detroit for the finals. In the final competition, the team’s robot stood up to a challenge from a bigger unit that tried to use its superior size to its advantage, but the swift, light robot proved to be more effective.

“After every competition, we’d come back and make changes to our robot and try to improve it,’’ Walton said. “We put the time in to make it work consistently.”

Kamen’s brainchild has evolved into a huge enterprise with district, state and regional events. Students have access to millions of dollars of scholarships, and classmates who are not scientifically inclined can provide support with administration, fundraising and community outreach. The events are backed by some of the world’s largest technological companies, including Qualcomm, Google, Ford and General Motors.

Walton and his teammates relished the opportunity to see how their robot stacked up against the competition. In the end, the students learned a lot about design, engineering and problem solving. And themselves.

“It was an amazing experience,” Walton said. “This entire season has been exhilarating.  We hit on a great design very early in the season and while we continued to refine it all year, we never really had to go back to the drawing board.”

“For the last several years, my teammates and I have talked about being ‘pleased but not satisfied,’ Walton added. “We wanted to take pleasure in the successes we achieve along the way, but we also wanted to always be looking for how to get better.  Our mantra has carried us through countless iterations, redesigns, and rebuilds. Now, at the end of my high-school career I think I may have found a situation where that saying can no longer be applied.  I'm definitely pleased and now, for the first time that I can remember, I’m also satisfied.”

Thomas Renner is a Connecticut-based journalist and writes frequently on manufacturing, building trades and other topics for national and international publications.