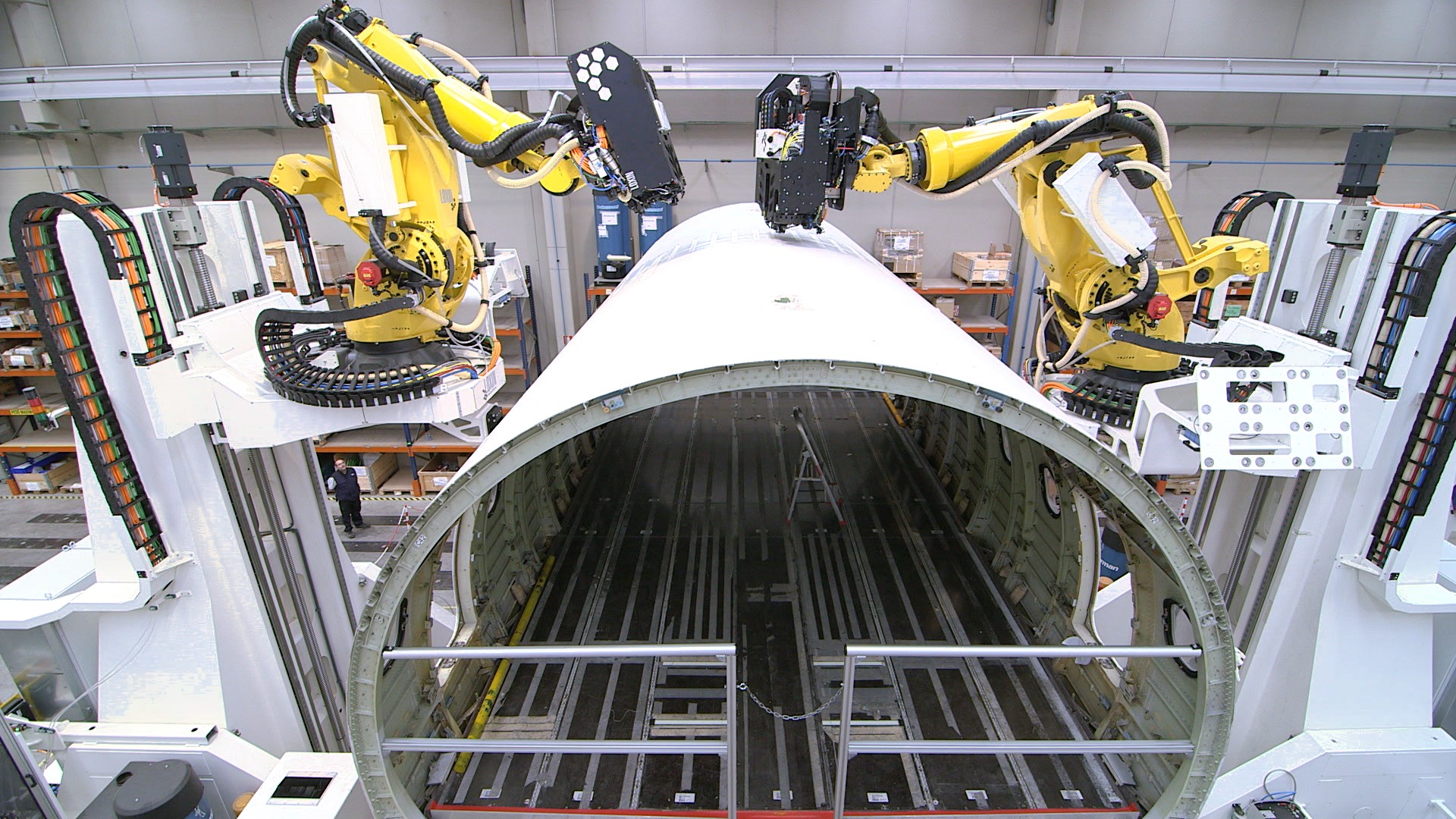 Robots are helping a European manufacturer of airplanes cut into an eight-year backlog of orders for one of its most popular aircrafts.

Airbus is using automated units developed by Loxin, of Spain, to assist in the manufacturing of fuselages for its best-selling A320 aircraft. The robots, which have been named Luise and Renate by Airbus workers, undertake the drilling and riveting of aircraft fuselages before final assembly. The robots provide faster and more efficient production for Airbus, which is seeking to increase production from 50 planes per month to 60. Airbus has sold 6,000 jets, with another 8,000 on order.

The robots are designed with e-chains® and chainflex® cables from igus®, a Germany-based manufacturer of high-performance plastic components. The company runs its North American operations out of East Providence, RI. The robots include 11 e-chains® and 19 cables. The long-lasting components are self-lubricating, maintenance-free, reduce downtime and offer increased service life.

The robots help drill more than 2,800 holes to join two halves of the fuselage. In the past, the work had been done by humans. The robots are more efficient than humans and more precise in drilling the holes.

“These robots are able to drill almost 80 percent of holes on the upper side of the sections, which improves the ergonomic working environment,” Airbus said in a press release.

The robots manufactured by Loxin are seven-axis units and are part of a new final assembly line where the fuselage and wings are transported by automated moving tool platforms, rather than lowered by cranes onto fixed jigs, and where dynamic laser tracking is used to perfectly align aircraft parts. The robots are used for drilling and counter-sinking, inserting fasteners and applying sealants in the shaft. 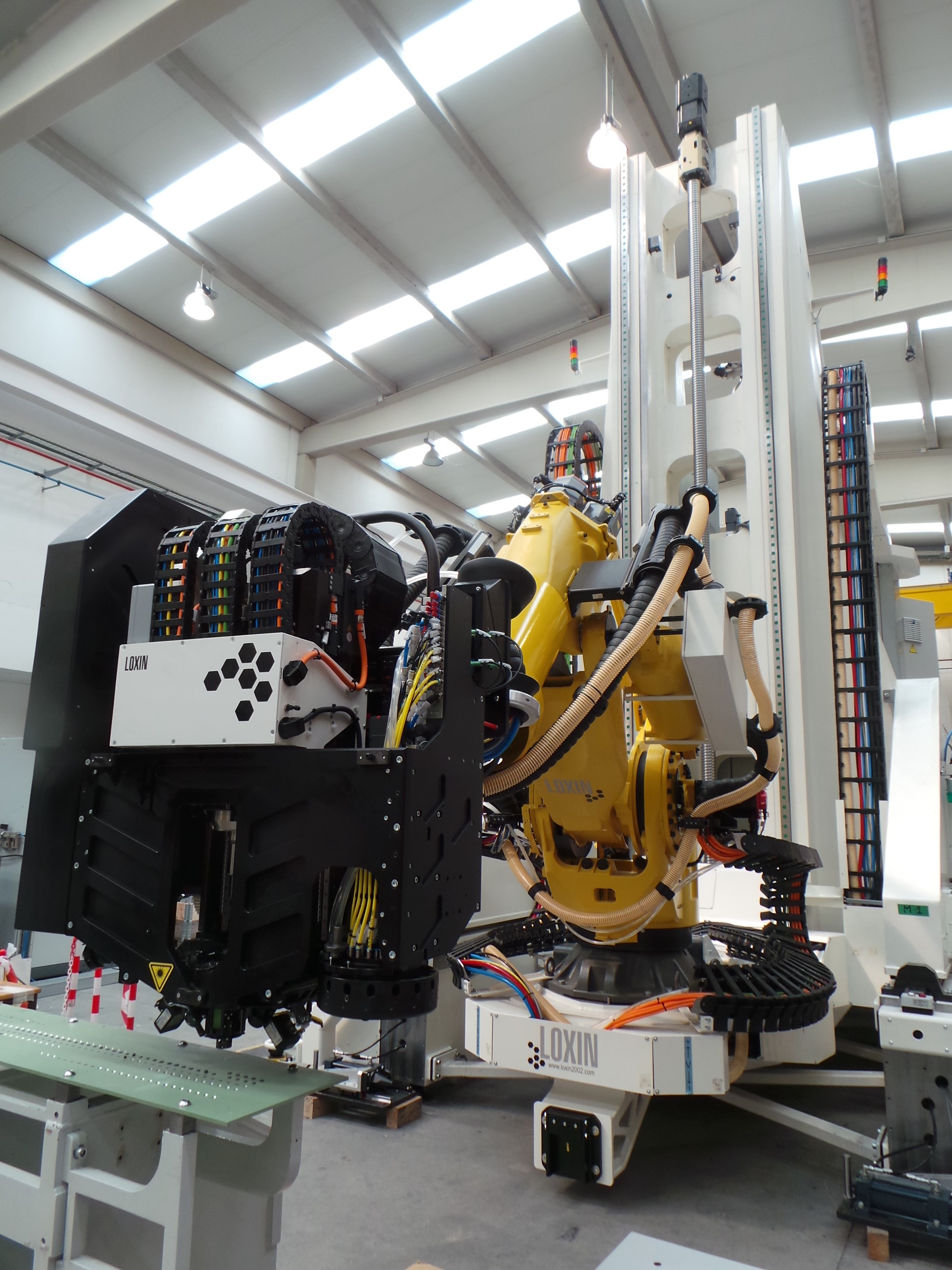 In the system, two e-chains® from igus® move three-dimensionally, so that the robots do not collide with the fuselage and cause damage to the aircraft. The e-chains® are attached parallel to each side of the robot arms, which facilitate movement of the arms and make the fuselages more accessible despite the difficult geometries involved.

“One RSE linear retraction system is attached on each side of the robot arm,’’ Martínez López explained. “This results in improved accessibility despite the complex geometries and the large number of guided cables and hoses. The cables and hoses bring into the application the connecting elements on one hand, and on the other, provide for the extraction of emerging dust. This allows for a larger working space, and collisions are neutralized between the fuselage and the robot end effector.”

Thomas Renner writes on manufacturing, building, construction, and other topics for U.S. trade publications. He can be reached at trenner@catalystmc.com.

Students from a Pennsylvania high school robotics team set out on a quest to design, build and compete agai...

An infection-control startup has developed a device for hospitals that kills 99.999 percent of MRSA on cell... 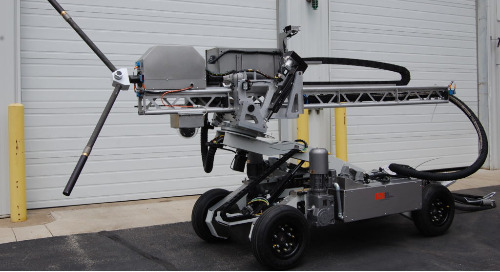 Students from a German university are building a solar vehicle to be powered by the blazing sun in an Australian desert in hopes of setting a Guinness World Record.

Students from a Pennsylvania high school robotics team set out on a quest to design, build and compete against the best teenagers from across the world.

An infection-control startup has developed a device for hospitals that kills 99.999 percent of MRSA on cell phones. Self-lubricating igus® components were used to design a quiet, dry-running system. 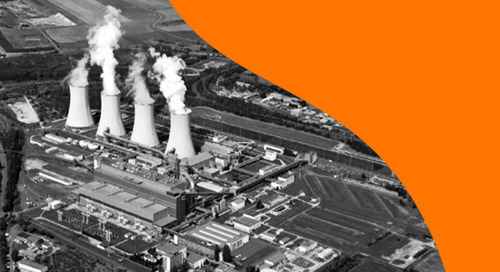 The world's longest e-chain® runs for over 10 years

A coal-fired power plant in the Czech Republic receives energy through an igus® e-chain®. This plastic cable carrier, which has continuously been in operation for ten years, travels over 2,017 feet.

Port of Virginia remains a leader with superior crane technology

At the Port of Virginia, thousands of shipping containers are lifted, moved and lowered by about 30 cranes. The fast-moving cranes stand more than 130 feet high and operate 24/7, often in extremely tu

The wheelchair redefined with igus® bearings

For wheelchair users, the judders of uneven ground can seem all too familiar. Determined to make ride discomfort a thing of the past, Israel-based company, SoftWheel, has completely reinvented the whe 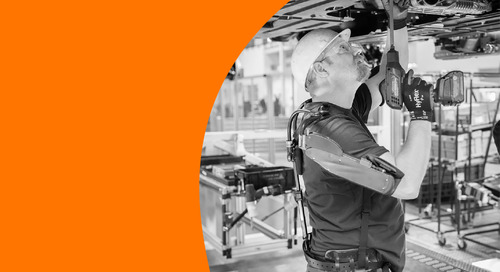 A new device that supports manufacturing workers is among the latest technological advancements that speak to the power of plastics. The device, the Airframe™ exoskeleton, is made by San Diego-based L

Pick-and-place automation has progressed beyond machine manufacturing and into the world of human anatomy. Research engineers at Brown University are building tiny versions of human organs, one micro-

Spanning across the Piscataqua River connecting New Hampshire and Maine, the Portsmouth Memorial Bridge was built in 1923 as an official tribute to the New Hampshire sailors and soldiers of World War

Device for boat operators is a breeze on the knees

Paul Nowack developed a love affair with the sea at an early age. His knees, back, and joints saw the Florida man’s passion as a love-hate relationship that grew more challenging with each new ocean a

Hyperbaric testing simulates deep-water conditions, and effectively assesses subsea equipment with hydraulic and electrical components at depth. Master Flo Valve Inc. is home to one of the largest cus

TRUMPF Inc. is a global leader in manufacturing machine tools. In one of its most complex and popular bending machine product lines, energy tubes from igus® are used to guide and protect cables. More

An offshore drilling company from Norway is using energy chains from igus® to help provide a reliable power supply under extreme conditions for automated drilling operations on platforms. 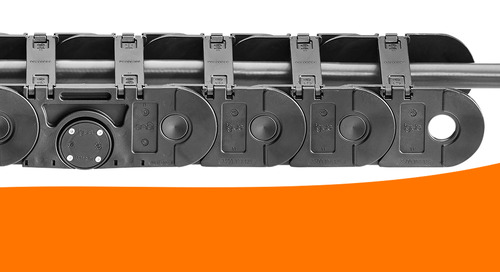 One of the world’s most innovative businesses in machine cutting has improved its productivity with igus® energy chains in one of its flagship products. Engineers at Messer Cutting Systems, based in W