Quite often, when a robot cell is designed, the method with which the cables and hoses will be managed is something that is considered entirely too late in the process. When it is time to design a cable management solution, the factors that typically dominate the decision making process are upfront cost, availability and previous experience.

Fast forward to that same robot cell deployed at a manufacturing facility when the operational costs begin to add up. According to research done by Rashidi Asari, operational costs of an industrial robot can be as high as 40% of the total cost of ownership. The three factors that make up operational costs are power consumption, downtime and maintenance. With power consumption relatively predictable at somewhere around 5 to 6% of TCO, that leaves a pretty big number for the other two factors. Asari, Rashidi. (2018). Automotive Industrial Robot - Total Cost of Ownership.

In my experience working with the automotive industry, downtime and maintenance numbers can increase operational costs and greatly affect the percentages. The numbers noted in the article are generalizations and for many robot applications I believe they could be considered accurate. That being said, there are thousands of applications where Operational Costs greatly outweigh the initial cost of acquisition. I have spoken with numerous managers in facilities across North America and they estimate downtime costs to be as high as $10,000/minute.

To demonstrate how this can affect TCO, I’ve created a short calculation to further support the importance of limiting downtime and maintenance costs. For the purposes of this demonstration, we will ignore power consumption costs as they are inevitable regardless of the robot, application and location of the facility. We are assuming that a full size six axis robot in a manufacturing environment is being used. **Initial costs are estimates and vary depending on the robot model and complexity of the job it performs.

We estimate the initial cost of acquisition at $250,000. This would include the robot, peripherals, cell structure, transportation, training and warranty costs. This may be considered high in some cases and potentially low in others depending on the robot model and application. The purpose of the exercise is to demonstrate that while these costs can vary, they can be calculated and will not increase exponentially. For the initial acquisition, we estimate that the cost of cable management is $2,000.

For the purpose of calculating operational costs, we will assume a downtime cost of $1,000/minute.  As you will recall, the costs can be as high as $10,000/minute. Other costs associated with downtime are labor and supplies, but they are inconsequential as it relates to the overall cost. Just the same, any reduction in failures and maintenance turnaround time can lead to reduced costs in this area as well. 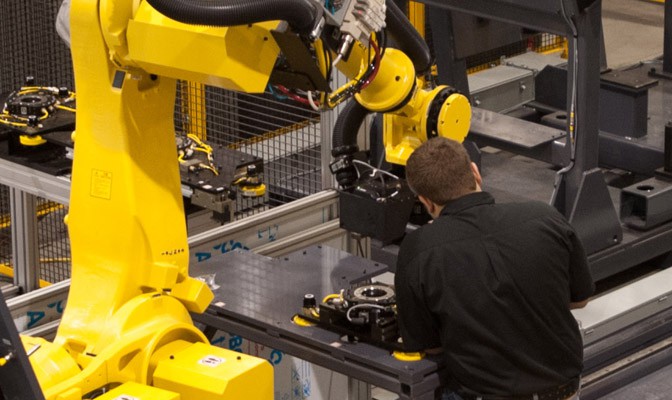 Unplanned downtime is key to this calculation. Most operations have planned “down days” and “shutdowns” where preventative and overdue maintenance is performed. While these planned maintenance periods are important, they don’t have the same impact on operational costs that unplanned downtime does. In my experience, if there is a cable management failure during production, the robot is shutdown temporarily and a “band-aid” repair is made by maintenance staff that will, hopefully, get them to a planned down day to give them the opportunity to properly repair the system.

These temporary shutdowns and subsequent fixes happen weekly, if not daily, at facilities across the country. These methods are generally accepted, and the actions taken to stem the tide are passed down from one staff member to the next. Each temporary shutdown takes an undetermined amount of time, but for our purposes we will estimate 15 minutes each time. That is a downtime cost of $15,000, and if it were to happen once per week, it would be a cost of $780,000/year.

It is estimated that robots are deployed for an average of 5 years. Over that 5-year span, the cost of one instance of downtime per week is $3,900,000. Now, to be fair, this number gets less startling if your facility has 1,000 robots. If that’s the case, you can amortize it out over that number of robots and determine that your downtime can be calculated at $3,900/robot over a five-year period. On the surface this makes sense. Keep in mind, this is accounting for only cable management related downtime, and if you remember, we allocated $2,000 for cable management at the beginning of this exercise. After 5 years, you could justify spending $5,900 on cable management and still break even.

If you’ve gotten this far, you already know that most robots in any given facility are low event, low operational cost assets. It can be estimated that 10-20% of the robots and their cable management systems are going to cause 90% of the headaches for maintenance staff and management alike. If we use 10% as a base number and refer to our previous calculations, 100 robots contributing to $3,900,000 in cable management related downtime equals $39,000/robot over 5 years or nearly $8,000/year. $39,000? That’s one heck of a nice cable management system, wouldn’t you say!

Up until this point, all the calculations have been relatively conservative in time and cost. The truth is in many plants the numbers are much worse. The question is how or why are they overlooked? I had the opportunity to work with a Process Engineer at one of the Big 3 automotive facilities in the United States. 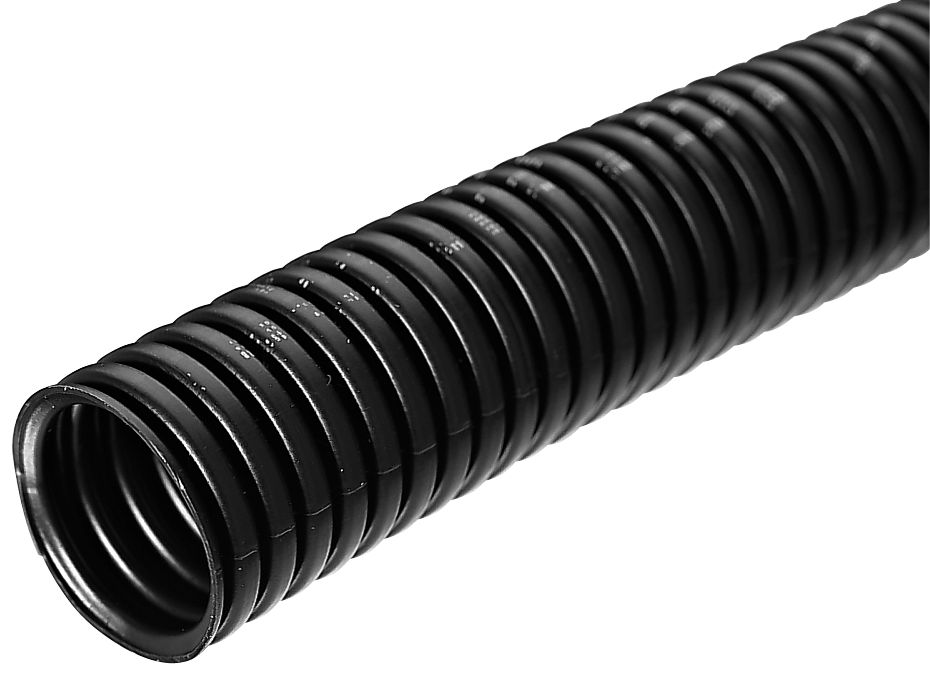 He took it upon himself to perform a study on the time it took to replace a damaged cable in a corrugated hose cable management system. Corrugated hose, for those of you who are not familiar, looks like a vacuum cleaner hose.  It is a tube that has a fixed diameter, resists torsion and bending and is hollow inside. Cables and hoses are inserted inside and left free to mingle, abrade and twist against each other.

This Process Engineer, we’ll call him Jim, studied the methods the maintenance staff were undertaking to reactively “replace” a damaged cable. He learned that they were adding a replacement cable to the outside of the tube and securing it to the tube with tie wraps. This quick turnaround maintenance typically resulted in 15-20 minutes of downtime.

Jim inquired about why they were replacing the cable this way. He was told that they had no way of quickly “fishing” the new cable through the tube. The cable had connectors on each end and the tube had a large grommet at the end acting as strain relief. This grommet, unless removed, prevented the connector from reaching the tool. Removing the grommet and accessing the correct cable was only one step that made completely changing the cable cumbersome.

Jim studied this “piggy backed” cable to see how long it would last.  The result, to no one’s surprise, was the premature failure of an expensive communication cable. To complete his study, Jim asked that during the next cable replacement, it be properly replaced. Jim was notified of a failure shortly thereafter and was onsite to witness the entire process. When all was said and done, the repair had taken 4 hours to complete. In Jim’s facility, downtime costs $10,000/minute! That meant the time to replace this one cable was done at a cost of $240,000 in lost productivity. These numbers do not account for the cost of labor or parts, frustrated maintenance staff or the plant manager having to answer to his superiors why vehicle production is down.

This anecdote may seem extreme and implausible, but they are verified by maintenance and engineering staff at facilities around the country. Hopefully, this calculation and anecdote has properly laid out the motive for the invention of a more user maintenance-friendly cable management solution for industrial robots. Our aim was to provide six-axis robot managers with a solution that reduced full cable or hose replacement time by more than 75%

triflex® R TRE by igus® incorporates several key features that not only reduce the likelihood of a cable failure, but it also makes changing a cable, regardless of the connector size, much easier. Check out this video that reviews some of the time saving design features. It can take as little as 5 minutes to replace a cable, eliminating the need to “piggyback” replacement cables on the outside.

To recap, using corrugated hose as a robot cable management solution can make it difficult to remove damaged cables and replace them with new ones. In an effort to reduce downtime, expensive replacement cables are tie wrapped to the outside of the corrugated hose to get back up and running. Corrugated hose resists torsion, transferring 100% of the mechanical stress to the cables. If there is one failure per week that takes 15 minutes to (improperly) repair at a cost of $1,000/minute of lost production, the cost of downtime will be $3,900,000 in 5 years. Now, if you reduce that by 75%, the company would save $2,925,000 and you would be a hero! You remember Jim? Jim is a hero! He replaced his corrugated hose with triflex® R and has seen a drastic reduction in downtime due to cable management. Jim is the envy of the maintenance staff in his facility because when they need to replace a cable it takes minutes instead of hours. 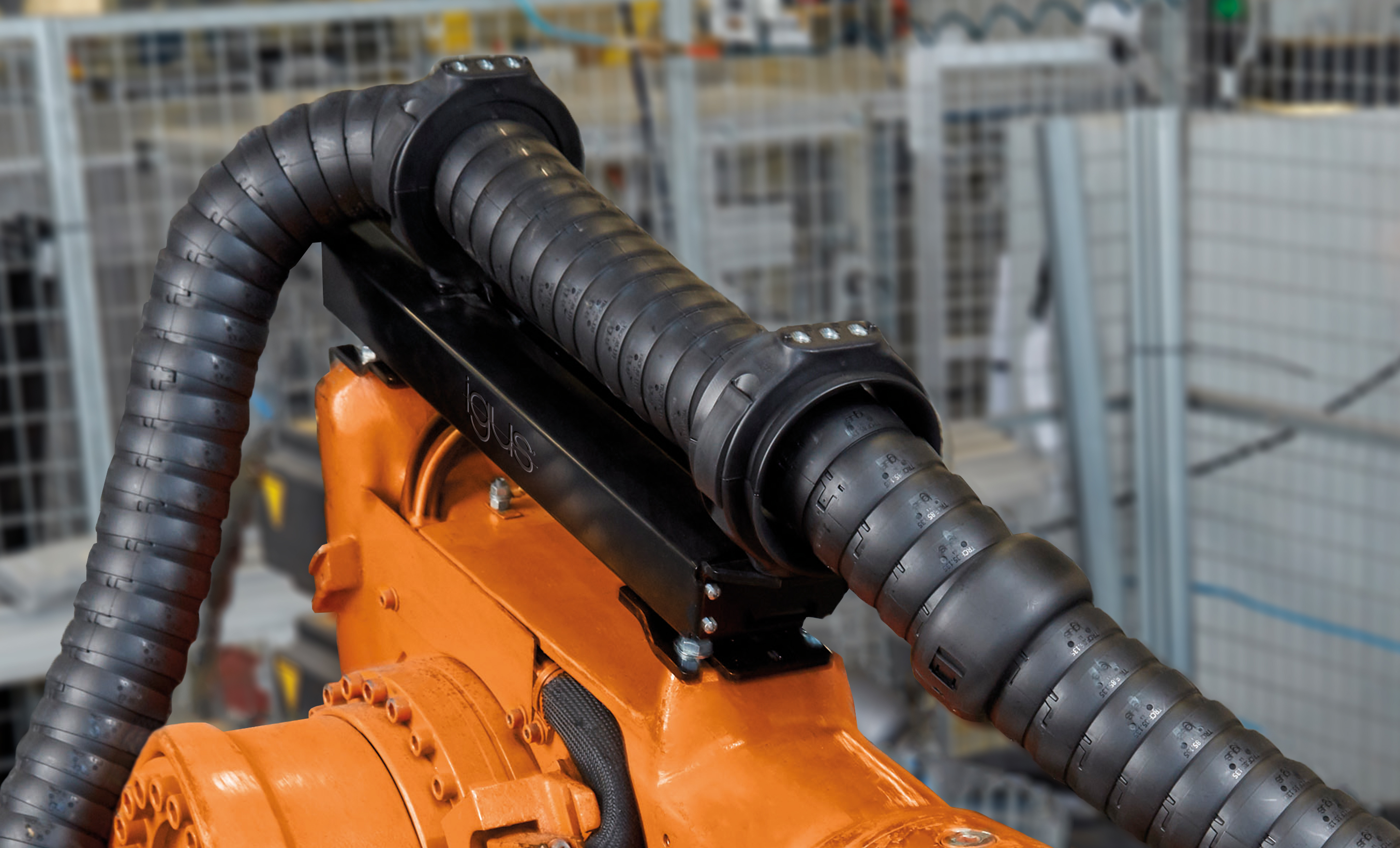 So, if you’ve had it with corrugated hose, I would be happy to answer any of your questions, consult on your application in person or virtually. After all, no matter which corrugated hose you choose, it will still require 4 hours to replace a damaged cable.

To learn more about your options for six-axis robot cable management and how igus® energy chains can save you and your company money, please visit our website: www.igus.com/info/robotics-multi-axis-cable-carriers

If you would like us to consult with your company, please reach out to me today to schedule a visit. Or feel free to email me directly at dsandiland@igus.net